3 Ways the Gospel Should Influence Leaving a Tip

I've worked in the service industry longer than I have in the church (at least as far as payroll is concerned). I am currently still bi-vocational and work part-time at my church and full-time as a shuttle driver for a hotel here in Omaha. I am paid below minimum wage, so tipping is an expected part of my income by my employers.

I've experienced good tippers and bad ones, but the most memorable ones were those whom I knew were Christians and yet tipped like they were Pharisees (All law, no grace. Bare minimum, no generosity). Particularly painful to me have been the large groups of Christians who occasionally take over the hotel for an event and the entire group tips poorly, because I know I'm not the only one who's tempted to form an opinion of these Christians by their tipping. I've even found myself apologizing to co-workers on behalf of other Christians and trying to use the opportunity as a springboard into presenting the gospel. Believe me, that's a tough sell (perhaps I'll write a post on that in the near future). But for now, I want share some guidelines I formed for myself after serving just such Christians. 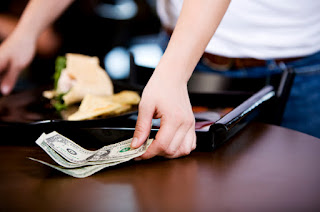 1. Your tip should reflect Christian generosity. God's generosity towards us should affect the bank account, every Christian knows that. But there is perhaps no better test on how great a hold the idol of mammon still has on us than how we tip. Disagree? "What about giving to the church and charities?", you ask. But both of those we do with our "Christian hat" on, when we give to such things we are acting out of our Christian sensibilities. When you tip, however, I bet you're all business. Right down to the penny (or rounded to the dollar if your lazy or bad at math). My brothers, this should not be!

2. Your tip should demonstrate grace—not law. If there's a problem with my meal, the last thing I do is take it out of the tip. I want to give the server every chance to make up what could be honest mistakes or problems out of their control. To begin subtracting from the tip before giving the server an opportunity to make it right reflects the heart of a hard-nosed legalist, not a heart stricken by grace.

But—and this is a huge "but"—nothing models gospel grace like a generous tip even after a server has blown it, been made aware of it, and was unable or failed to "make it right". I know this is a hard pill to swallow for many of you (myself included), but why should the tip be the last thing to be impacted by the grace that has been poured out on us? I've talked to Christians who will simply gush about the grace of Christ towards us . . . and then not think twice about leaving a terrible tip for terrible service. Why reinforce the system of law by which the whole world runs when we have the resources of grace to draw from?

3. Your tip should embody the gospel. I know, I know. "Embody the gospel? In a tip?!" But if the gospel really is the all-encompassing reality that it is, then it should affect every area of our lives, and every area of our lives can reflect it. When Christians tip, we should not only give more than expected (point 1), and give more than deserved (point 2), your tip should be a tangible outgrowth of the grace and generosity you yourself have received as not just an undeserving but ill-deserving sinner. We have all performed below what was expected of us and even in direct rebellion against the one we were made to serve. And yet the gospel is that God gave out of his riches both generously beyond what we could have hoped for and graciously beyond what we ever could have earned. And if God has given out his endless and bottomless generosity on our behalf, we have that same treasury to draw from. The gospel allows us to release our vice-grip on earthly riches and instead use it as a tool for the gospel.

Bonus point: Don't leave a gospel tract unless you've done points 1-3. So maybe gospel tracts aren't your thing (they probably aren't unless your 40 or older). My church encourages members to take our pens with them and leave them around. I have business cards with all the church info on it. But if you have anything you like to leave in the name of evangelism, don't leave it unless you are tipping out of generosity, grace, and the gospel. To leave a gospel tract with an average or poor tip is unattractive at best. To leave a gospel tract instead of a tip is downright detrimental. That's like saying, "You need this and I know it. I need this and I don't know it." If your tip doesn't grow out of the gospel message of grace and generosity, then your tract probably won't communicate it.

Can't afford to tip this way? Then, as one in the service industry, I would suggest one of two things. Either eat at fast/casual restaurants where you place your order at a counter and no tip is expected, or dine out in such a way that no one knows your a Christian (i.e. no prayer, no "Jesus talk", no books at the table with crosses on the front). I think you know which option I would suggest.


Feedback: Have you ever worked in the service industry? What do you think is a good tip? Do you think a gospel tract left with the tip is ever effective?

This is a cross-post from the Christians In Context blog.
Posted by Jared Totten at 9:08 AM