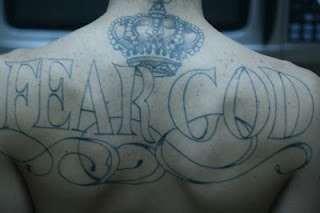 The idea of fearing God is a common one in the Bible, especially in the Old Testament. But it is almost completely foreign to the modern conception of God, one that often no deeper or well thought-out than the simple platitude of "God is love". For this reason, the idea is often a difficult hurdle for many reading the Old Testament the first time.

The first thing that must be made clear is that fearing God is not equal to being afraid of God. Certainly, being afraid may be part of one's proper response to God. Consider the prophet Isaiah's response (Is. 6) or the disciples' response at the realization of who Jesus really was after calming the storm (Mk. 4:35-41). This kind of fear is the natural response of the finite in the presence of the infinite, the response of the sinful in the presence of the holy. But being afraid is not the sum of fearing God. In fact, I would suggest that the greater part of the biblical concept of fearing the Lord has nothing to do with being afraid (this would explain why God and the angels so often had to begin their messages with the phrase "Fear not"). Thus when God calls us to fear him, he is calling us to much more than being scared and faint-hearted.

In 2 Kings 17, God explains why he has sent the nation of Israel into exile. And it begins with this:


And this occurred because the people of Israel had sinned against the LORD their God, who had brought them up out of the land of Egypt from under the hand of Pharaoh king of Egypt, and had feared other gods and walked in the customs of the nations whom the LORD drove out before the people of Israel, and in the customs that the kings of Israel had practiced.
(2 Kings 17:7-8 ESV, emphasis added)

Are we to take this as meaning that the Israelites spent sleepless nights huddled in the corner with their swords for fear that the their little household idols might turn homicidal? Of course not. In fact, this passage makes little or no sense if we force our simplistic, modern meaning of "fear" on the text. But the author doesn't leave us guessing. The rest of 2 Kings 17 details the nature of their fear of other gods, and in doing so fleshes out the the biblical idea of fear.
So in summary, the biblical concept of fear (both the Israelites' misplaced fear of other gods, and our properly directed fear of God) speaks of that which we deem greater than us and worthy of worship, sacrifice, and obedience. Some Christians thinkers have summed all this up in one word: reverence. Yes, there is a place in this definition for the natural response of the finite in the presence of the infinite, the response of the sinful in the presence of the holy. But I submit to you that this is not the whole (or even the greater part) of godly fear. To fear God is to esteem him most worthy of our worship, sacrifice, and obedience.