The progression of heaven and hell 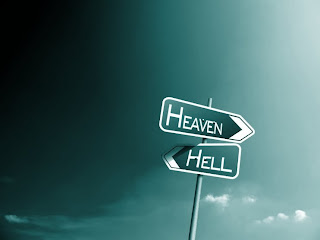 Alright, pop quiz: if you were to die tomorrow, where would you go? No, this isn't the beginning of an evangelistic spiel (though if you want to have that talk, I'm available). Well, if you've been influenced by popular Christian thought, your answer would probably be one of two options: heaven or hell.

However, I'm going to suggest something that might shock you: the popular conceptions that Christians hold of heaven and hell are not necessarily in operation right now. The common picture of both heaven and hell is actually a blending of a few different "stages" of the afterlife that we've just balled into two simple concepts (in fact, biblical writers sometimes do this as well, only adding to the confusion). However, a careful reading of the Bible reveals that the afterlife for both the righteous and unrighteous is in process. While this sounds complicated, the stages are simple and clear-cut: they advance with the greater revelation of Jesus Christ and the gospel.

In the Old Testament, Sheol (sometimes translated "the grave" or "hell" in our Bibles) represented the place where all the deceased go. It is used in reference to the destination of both the righteous (Gen. 37:35, Job 14:13) and the wicked (Prov. 9:18, Ps. 55:15, Is. 5:14). While the Old Testament doesn't develop the idea much, Jesus' parable of the rich man and Lazarus actually gives us a vivid illustration. Luke 16 tells us that Hades (the Greek version of Sheol) was split into two subdivisions, a place of comfort and a place of torment, with a chasm between.

At Jesus' crucifixion, he tells the repentant thief "Today you will be with me in Paradise" (Luke 23:43). Yet when the resurrected Jesus meets Mary outside his tomb, he says "Do not cling to me, for I have not yet ascended to the Father" (Jn. 20:17). Where has he been for the last 48 hours if he hasn't been "up"?

However, after the death and resurrection of Jesus Christ, it seems the dwelling place of the saints is moved above (2 Cor. 12:2,3)—at least inasmuch as you can give directions like up and down to the spiritual realms. Regardless of where the current "location" of Paradise is, we can be certain that it is in the presence of the Lord (2 Cor. 5:8) which is not a complicated thing for God no matter where Paradise is currently located.

Upon the return of Christ, we finally see the popular conceptions of heaven and hell finally implemented. The new Jerusalem, streets of gold, the river of life, the tree of life, the city of God all coming down from "a new heaven" (Rev. 21,22). This seems to fit perfectly Jesus' message to his disciples: "And if I go and prepare a place for you, I will come again and will take you to myself, that where I am you may be also." (John 14:3) Notice the timing: when he comes again they will be taken to the place Jesus prepares. This makes logical sense when you consider that we don't get our resurrected bodies until the return of Christ, thus the current "heaven" only has to be compatible to souls/spirits while the new heaven and new Earth have to be compatible to remade bodies. And concerning "hell", the transition is even clearer: "Then Death and Hades were thrown into the lake of fire. This is the second death, the lake of fire." (Rev. 20:14)

Before you panic, let me clarify. This is not limbo. This is not purgatory. Nobody's working off sin, waiting for merit, or getting extra chances to respond to the gospel. All three stages of heaven are a realm of blessing and comfort in the presence of the Lord. All three stages of hell are outer darkness with weeping and gnashing of teeth. Nobody's changing sides after death. What does change (as I mentioned before) is the level of revelation regarding Jesus Christ and the gospel.

This is actually (in my opinion) an elegant solution to some historically problematic verses that are highlighted by a phrase from the Apostle's Creed: "He descended into hell". These verses (Eph. 4:8, 9, 1 Pet. 3:18,19) say that he "descended into the lower regions", "he went and proclaimed to the spirits in prison", and "when he ascended on high he led a host of captives".

I am proposing that at his death Jesus descended to Sheol and proclaimed the mystery of the gospel. Now this is not an evangelistic proclamation. Rather he is saying "All you rebels, this is what your self-righteousness was rejecting" and "All you saints, this is what your faith was looking forward to, built upon, hoping for, and trusting in". Then upon his victorious proclamation of the gospel, Jesus led a mass exodus of saints out of Abraham's bosom (part of Sheol) and Paradise was carried away from Hades and "up" to await the final revelation of Jesus Christ.
Posted by Jared Totten at 9:43 PM